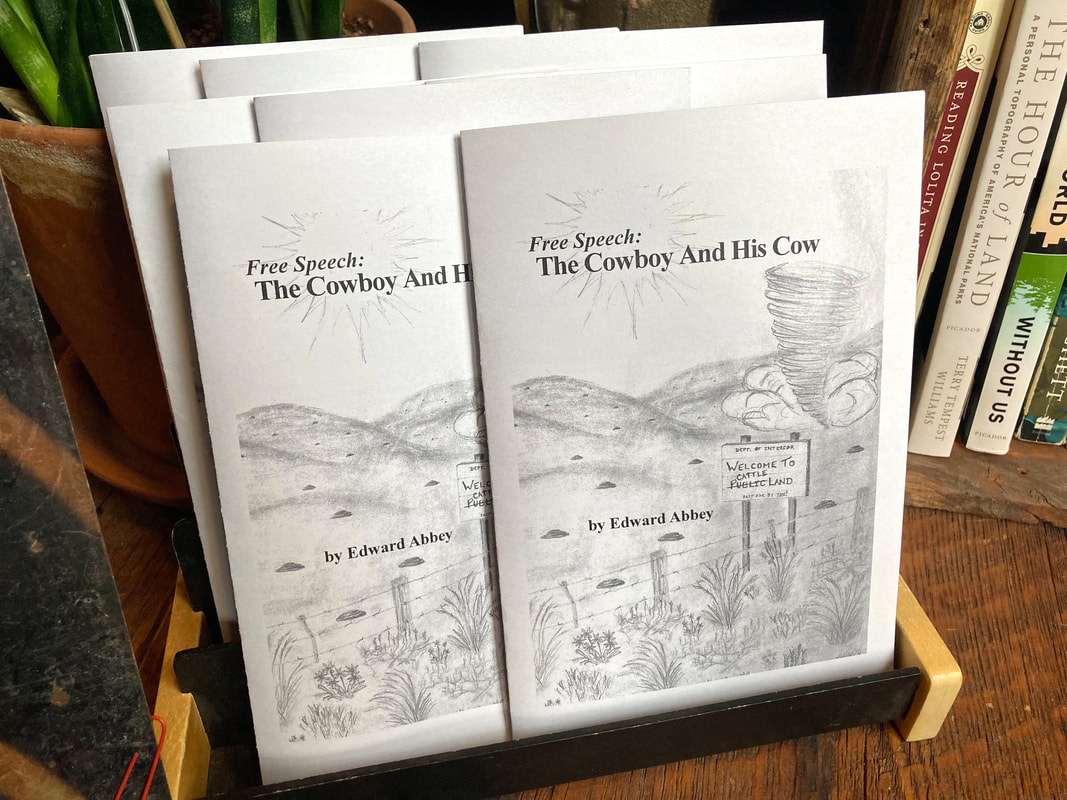 Edward Abbey's [in]famous speech "The Cowboy And His Cow" in zine format.
“Cattle are a worldwide curse. Besides the methane they produce, cows are an excuse for burning the Amazon, the loss of which, many think, will be the tipping point for the global carbon exchange keeping the planet alive.”
-Doug Peacock, Was It Worth It?

Foreword
​          I was well into my adult years before I learned how to see the land. My first clear view of the American West broke my heart. At last, I saw how we’ve abused and depleted the land. At last, I saw that cattle, barbed wire, and cheatgrass are not native to our western landscapes.
After graduating high school and completing a few semesters of Junior College in California, I moved to Wyoming. The myth of the cowboy had seeped into me and I thought I wanted to become one. If I had known the works of Edward Abbey then, I could’ve saved myself the trouble. But in the early-2010s, I had not yet found my band of renegade naturalists.
It did not take long to debunk the popular fiction of the American cowboy. I found nothing romantic about brandings. Nothing mystic about pushing cows. Nothing admirable about stringing barbed wire.
As I nudged the flanks of the patient horses that were gracious enough to carry my weight, my senses started to nudge my intuition awake from its deep, static sleep.
The work being done was not right. The animals we were fattening for slaughter did not belong in the environment that we’d placed them on top of. The cattle were trampling and wasting the watersheds, denuding the land, and displacing the wild species that I loved. The ranchers were not working with nature, they were battling against it.
Today’s western rancher is a serf, a slave in service to their own abusive industry. Public lands ranchers aren’t welfare ranchers because they want to be, they’re welfare ranchers because that’s what they’ve been reduced to. Big Ag, the USDA, and the meat-packing and distribution industries have left even the most established western cattle operations checking under the front seat of the old Ford for loose nickels. Why these ranchers continue to defend their “way-of-life” and the two-timing industry that’s made it impossible for them to get by is beyond me.
But the blame for the continued degradation and exploitation of our public lands does not ride solely on the backs of our western cowboys and ranchers. You and I are the agricultural industry’s financiers. We are the consumers that these stockgrowers serve. We’ve not seen meaningful agricultural reform come to fruition because we’ve not demanded it.
Read Ed Abbey’s speech with undivided attention. It is more relevant and pressing today than it was when he delivered it in 1985. Follow it up by watching the documentary Cowspiracy: The Sustainability Secret. Engage your local Bureau of Land Management office. Tell them you don’t support renewing grazing allotment contracts. Most importantly, take the beef out of your shopping cart and put it back on the rack. Let it rot. Let its cost be felt. That sends the only kind of message our policy makers and industry leaders listen to.

-Douglas Balmain
Free Speech:  The Cowboy and His Cow
by Edward Abbey
Monday, April 1st, 1985. University of Montana. Edward Abbey approaches the speaking podium brandishing his Colt pistol in one hand, a bottle of Chivas Regal whiskey in the other, and delivers the following speech “before a rowdy crowd of five to six hundred students, ranchers, and instant rednecks (transplanted Easterners).” 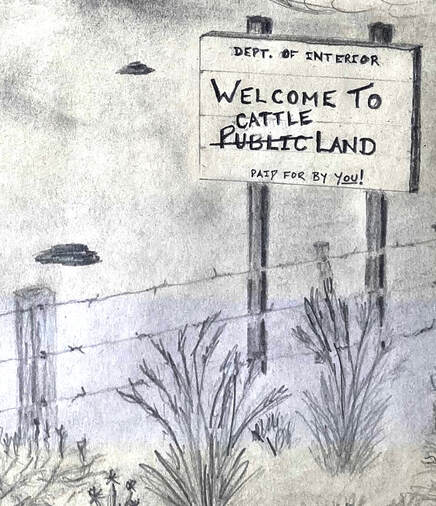 Back cover art. Douglas Balmain. 2022.
​"In my book, a pioneer is a man who turned all the grass upside down, strung barb-wire over the dust that was left, poisoned the water and cut down the trees, killed the Indian who owned the land, and called it progress. ​If I had my way, the land here would be like God made it, and none of you sons of bitches would be here at all."
- Charlie Russell, speaking to the Great Falls Booster Club in Montana, 1923.